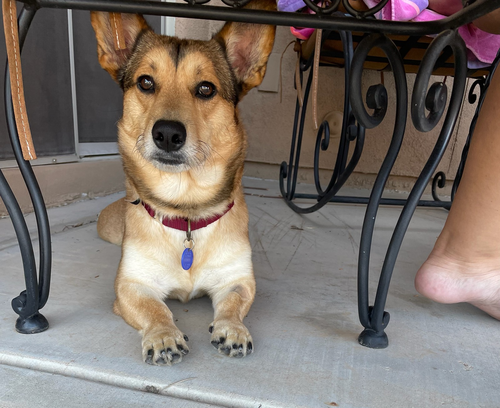 The Story of Sheldon (Longbottom)

Sheldon (Longbottom at the shelter) came into rescue through a county pound. He had been found roaming the streets and had gone, intact, to the backyard of someone's home where they had a female in heat. They caught him and took him to pound. In that environment he completely shut down, wouldn't look at anyone, wouldn't move, pancaked on floor or hid under bedding. He would allow handling and was never aggressive, just shut down scared. They couldn't adopt him out nor keep him after the stray hold so they contacted rescue. Sheldon is shy with new people, but one walk with him and he is your best bud, out of that shelter environment. When the rescue worker went to pick him up, he was hiding in an unused office (they knew the rescuer was coming so moved him closer) under a desk in the pitch dark. She went in, sat on floor, the coordinator there leashed him and dragged him close to volunteer. She offered her hand and soothing words, he climbed in her lap, let her pet him, pick him up, but was just was rigid. She signed papers, carried him out and the minute he was in her van he started to relax. He KNEW he was getting a second chance. She drove him out to a park to meet his foster family, and took him for a walk. The next thing you know, he was smiling, jumping on her, rolling over for belly rubs, just being a silly pup. Sheldon had kennel cough, mange, and allergies and required being neutered, and having rear dewclaw removal. Sheldon (so named for his little "quirks" after The Big Bang Theory) is the sweetest, most cuddly, loving, active boy who plays well with other dogs, avoids any loud obnoxious dogs, and keeps himself entertained. He loves to chase ducks, swim in the park lakes, chase the ball for hours, but he still needs to go slow on introductions to new people and he is petrified of big dogs.

© 2002 - 2022 CorgiAid, Inc. All rights reserved.
You may not republish information from this page without permission.
Please contact us to link to our site.